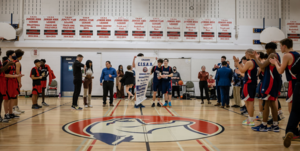 On Wednesday, March 2, 2022, in senior varsity basketball action, the boys traveled to École de la Rose Sauvage (ERS) to take on the Cougars in the league final. This has been an intense and competitive match up all year and Wednesday’s game did not disappoint.
Sauvage took the early lead, but the CWA Crusaders were up at the end of the first quarter. The game remained close throughout, and with 2:30 left to play in the 4th quarter, Sauvage had a 5 point lead. With 1:30 left to play, Sauvage had a 3 point lead, with 57 second remaining they were up by 1, and with 22.5 second left they were up by 3. In the last 20 seconds, Jacob Beattie (CWA) had a huge offensive rebound that he kicked out to Alex Hernandez (CWA) for the 3 pointer to tie the game and on to overtime they went. The Crusaders took the early lead in overtime before Sauvage stormed back with a few baskets of their own. In the final minute, Sauvage went back up by 2, and moments later Joshua Njongwe (CWA) drew a foul and made a free throw to bring the game within 1. With 12 seconds left on the clock and the Crusaders down by 1, CWA got a steal in the backcourt off the inbound and scored to take a 58-57 lead, leaving 2.6 seconds for the ERS Cougars to try and score. The Cougars made a long inbound pass and got the shot away but it didn’t drop. Crusaders win, 58-57.
The energy, determination, passion, skill, and teamwork shown was just incredible, and the coaching staff are so proud of these boys!
Up next: Challenge match vs. PICS from Edmonton on Wednesday, March 9 next week in Olds for a spot in the Provincial Championships.